Over the course of three days in August, I along with more than 670 participants at the Ohio UAS Conference 2014 in Dayton, OH, witnessed a large number of government and aerospace company attendees interested in taking drones into commercial markets.  From the dozens of presentations and interactions I had with academics, military contractors, aircraft manufacturers, parts suppliers and many others at the event, it’s clear that government and aerospace have jumped on the drones-for-commercial-use bandwagon.  But, for a number of reasons, this group’s aircraft aren’t going commercial just yet.

To be clear, the Ohio show was about showcasing proof of concepts and building partnerships – not flying and getting customers. This stands in stark contrast to the Precision Aerial Ag Show I attended earlier this summer, where many vendors demoed their aircraft and showcased their customers and established relationships with local service providers.

Why the dissimilarity?  Part of the difference is in approaches to FAA regulations.  The aerospace and military contractors play it safe by following all the FAA guidelines — regardless of which airspace they fly or test in.  But commercial vendors, whose aircraft and commercial applications are intended only in Class G uncontrolled airspace approach FAA guidelines as just that—guidelines. I wrote about these “radical opposites” in The Business of Drones: A Tale of Two Cities.

What I found interesting about the Ohio show is that it revealed evidence of a closing gap between commercial and public sector approaches to drones. I see a trend in which aerospace companies are beginning to adopt model aircraft and consumer technology. Let me explain by telling the story of three vendors I saw.

Thanks to Detroit Aircraft, I got my first hands-on look at Lockheed Martin Indago VTOL. 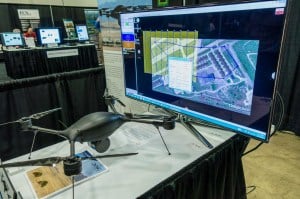 Detroit Aircraft is an authorized distributor of the Indago. And it is one sleek, sophisticated machine. It is perhaps the most highly engineered quadcopter system ever built. And you would think so given Lockheed’s deep R&D pockets and experience with programs like Desert Hawk, Persistent Threat Detection System aerostats, and the K-MAX unmanned helicopter system.

But the Indago wasn’t engineered for those same purposes nor by those groups.  Rather, it was created by Procerus Technologies, a company Lockheed Martin acquired in 2012.  The target market for this system was to be public safety / first responders and compete with the likes of the Aeryon Scout and Draganflyer Guardian.

For the most part, the $45K Indago system is capable for first-responders.  The copter is compact, lightweight (5 lbs.), and folds up, so it’s packable.  It’s enclosed, so it’s all-weather. It’s got a removable two-sensor gimbal (video and infrared), an IP-based digital video and data link, a hand controller and/or full ground control station, zoom-in video monitoring, and much more.  It seems the engineers thought of everything – including putting a GPS on the hand controller so the copter can ‘follow me’ wherever it goes. But they missed a big feature. The Indago lacks pretty standard video recording capabilities — capabilities that you find on a point-and-shoot camera and hobby store quadcopter. There is no onboard HD video recording, no live stream HD, no stabilizing gimbal for the camera, no HD 1080p / 60 fps recording, and no still photography for photogrammetry or near-infrared image capture.  Bottom line: What you see and record on the downlink monitor is irresolute shaky video.  Oh my.  That’s four years behind.

Not to worry. Enter Detroit Aircraft. When they got a hold of the Indago, they realized these shortcomings straightaway.  The first order of business was to engineer a 2D gimbal mount and video feed for a GoPro HERO camera. At least now you can record stabilized HD video. They also affixed a consumer camera and an infrared trigger for photogrammetry.  More is being done.  As this firm continues testing and integration you can expect Lockheed Martin to catch up with off-the-shelf model aircraft technology.  For more on nuances of modern aerial photography see this post.

Nobody wants drones to collide with each other – let alone collide with manned aircraft.  So, you have to test prevention systems to see if they work.  Camo is doing that. 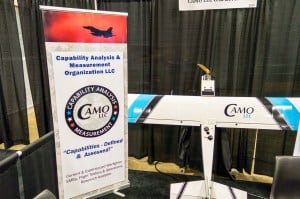 As ‘system of systems’ subject matter experts, their discipline and attention to detail make them ideal candidates for this. They do test and analysis planning, execution, and reporting for integrating war fighting systems.  In layman’s terms, that means they test all the individual sub-systems to make sure they talk to one another.

Systems of systems engineering is much needed if we are to see large-scale integration of commercial drones into controlled airspace.  Camo is well equipped for testing the integration of ADS-B with autonomous flight controllers – which they are doing.  ADS-B or ‘automatic dependent surveillance – broadcast’ is a cooperative surveillance technology in which an aircraft determines its position via satellite navigation and periodically broadcasts it, enabling it to be tracked. The information can be received by air traffic control ground stations as a replacement for secondary radar.  It can also be received by other aircraft (or drone) to provide situational awareness and allow self-separation.

But here is the news. They are testing SkyGuard ADS-B on a Mentor-G fixed-wing model aircraft.  The auto-pilot flight controller is open source APM 2.6 by 3DRobotics.  Their flight is Mission Planner which is also open source.  What gives?  Why would a military vendor be testing on model aircraft and open source technology?  Well, for one thing, cost.  It’s cheaper than licensing a proprietary system and in some cases it’s just simply a better choice.  Open source drone software has in some ways become more functionally mature than its military counterpart.  As I said above, this is a new trend. You can find out more on open source drone technology here.

SelectTech Geospatial (SG) has the local reputation of being the ‘Monster Garage’ of UAS. The Monster Garage TV series used to assemble a team of people with mechanical, fabricating, or modifying expertise to modify a vehicle into a “monster machine.” This generally meant making one vehicle that could transform into another. While the soberness of such designs was many times in question (such as when a police car transformed into a donut shop), the ingenuity of the engineering was not.  Such is the case with SelectTech.  This engineering and technical services company started as a rapid prototyping manufacturing service for military hardware and systems and soon realized the market potential for drones doing civil geospatial applications services.  SG is located at the Springfield Beckley Municipal/Air National Guard airport in Springfield, OH.  The facility is a renovated 17,000 sq. ft. hangar capable of high tech engineering and design, software development, prototyping, manufacturing and production, product validation and extensive flight testing.

At the conference, they exhibited some of their unique monster machines – like this aircraft

with a removable fixed wing that allows it to be transformed into a multirotor quadcopter.  What they didn’t show was this UAS designed and built back in 2011 with the help of a 3D printer. This was the first non-government-built aircraft of its kind. It has a wingspan of four feet and weighs about five pounds. Powered by an electric motor and lithium polymer batteries, it flies in winds in excess of 25 knots. But here is the news.  The initial flight trials were made at the Springfield-Beckley airport under The Academy of Model Aeronautics (AMA) flight rules – not under FAA rules for Certificates of Waiver or Authorization (COA) or Special Airworthiness Certificate (which are normally required for UAS aircraft). So, basically, it is an advanced model aircraft and one more example of an aerospace company adopting model aircraft and consumer technology.

To reiterate a point I made in this post, aerospace firms and military contractors have to a great degree been naive about the power of what a model aircraft drone can do commercially and how overpriced military-spec drones are for the civilian market.  It seems that trend is changing and with firms like the three I mention above, this convergence of technology will continue.

As always, feel free to comment or you have questions and would like to discuss any of this one-on-one, email me at colin@droneanalyst.com.